Day number two was a lot of fun, and very eventful! We decided to skip Portland and continue down the coast. Both of us had already been there a few times, so we were excited to head further south instead. 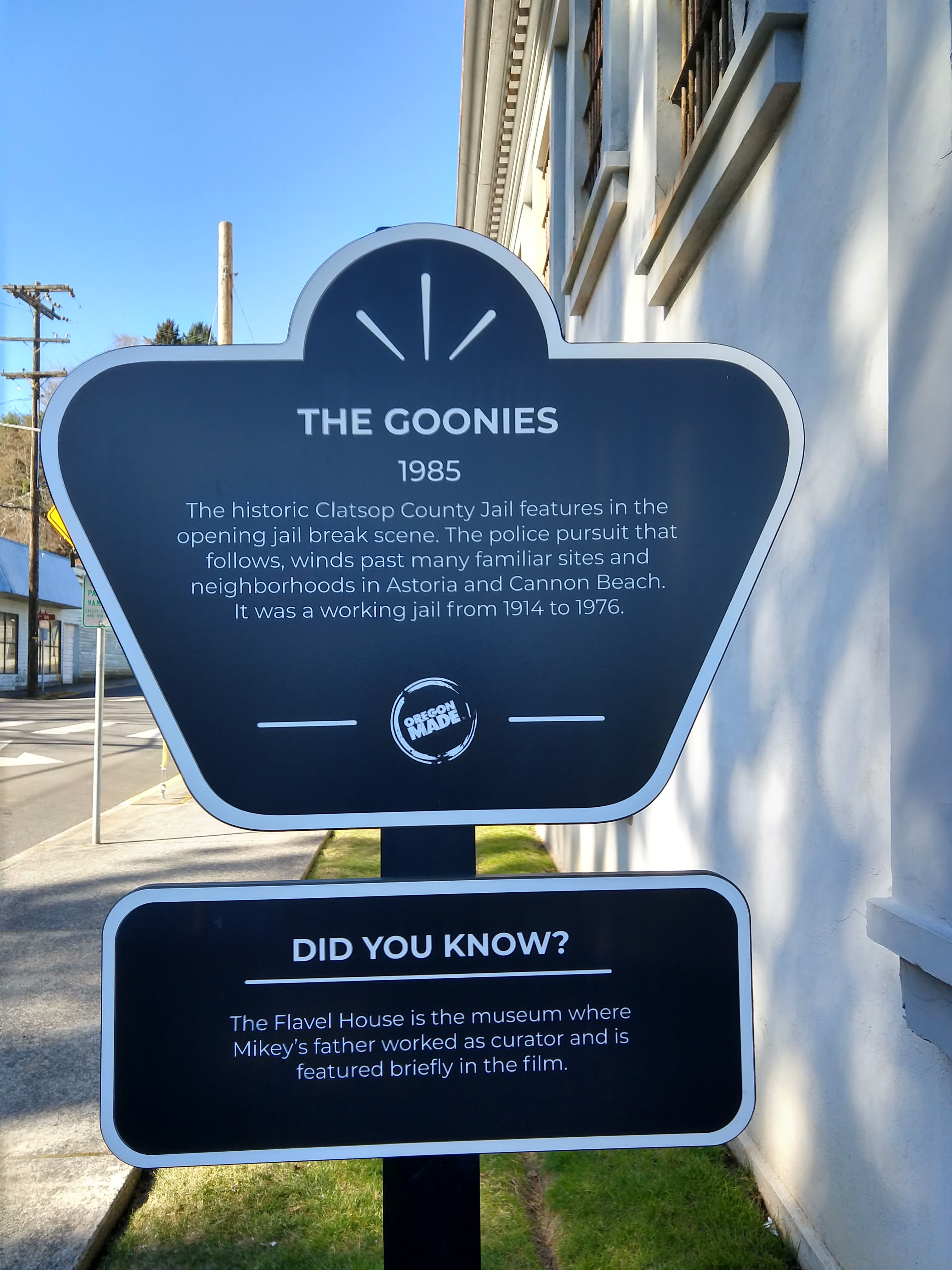 We started off the day by driving to the huge pole known as the Astoria Column, which is essentially a 126-ft. pole with an observation deck. In the middle is a spiral staircase of 164 steps. Needless to say, we were a little bit out of breath by the time we got to the top! We got really lucky today and the weather was extremely clear. Due to this, we were able to get a few of our own shots of the Astoria bridge, as well as some shots of the Youngs and Astoria River valleys. 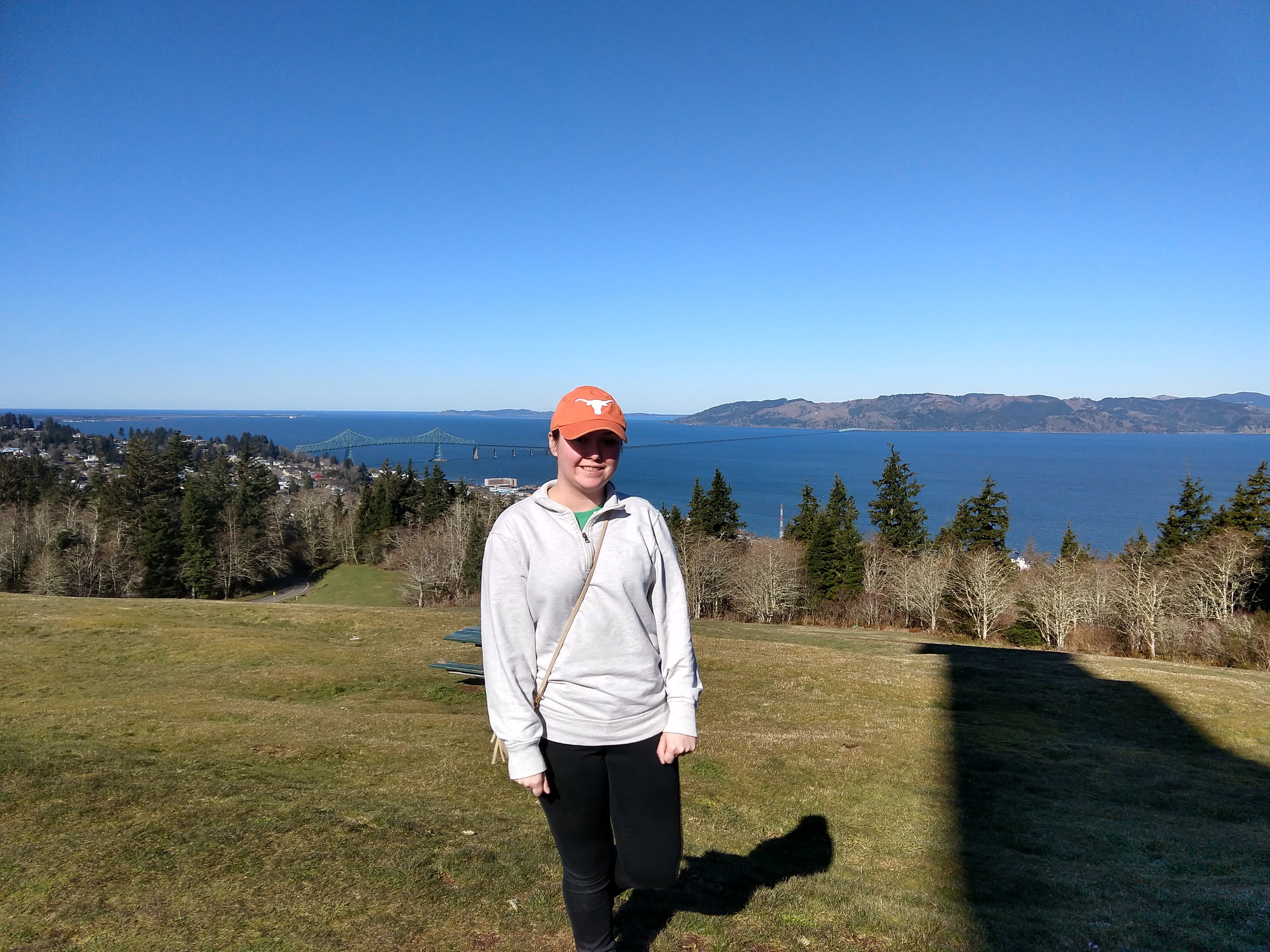 We had to make a few stops for lunch food, as well as to pick up one of the pennies we are collecting (more on this later). One of those stops was the jail from the Goonies movie.

From there, we headed over to Seaside, which is allegedly where the explorers, Lewis and Clark, finished their journey of exploration. It was a very neat little town, and we ended up spending some time there. We tried the Seaside Inverted Experience, where you take photos that are supposed to look upside down. It was a lot of fun. We also picked up some salmon jerky that ended up nearly making us puke in the car. Don’t get salmon jerky. Stick with smoked salmon. 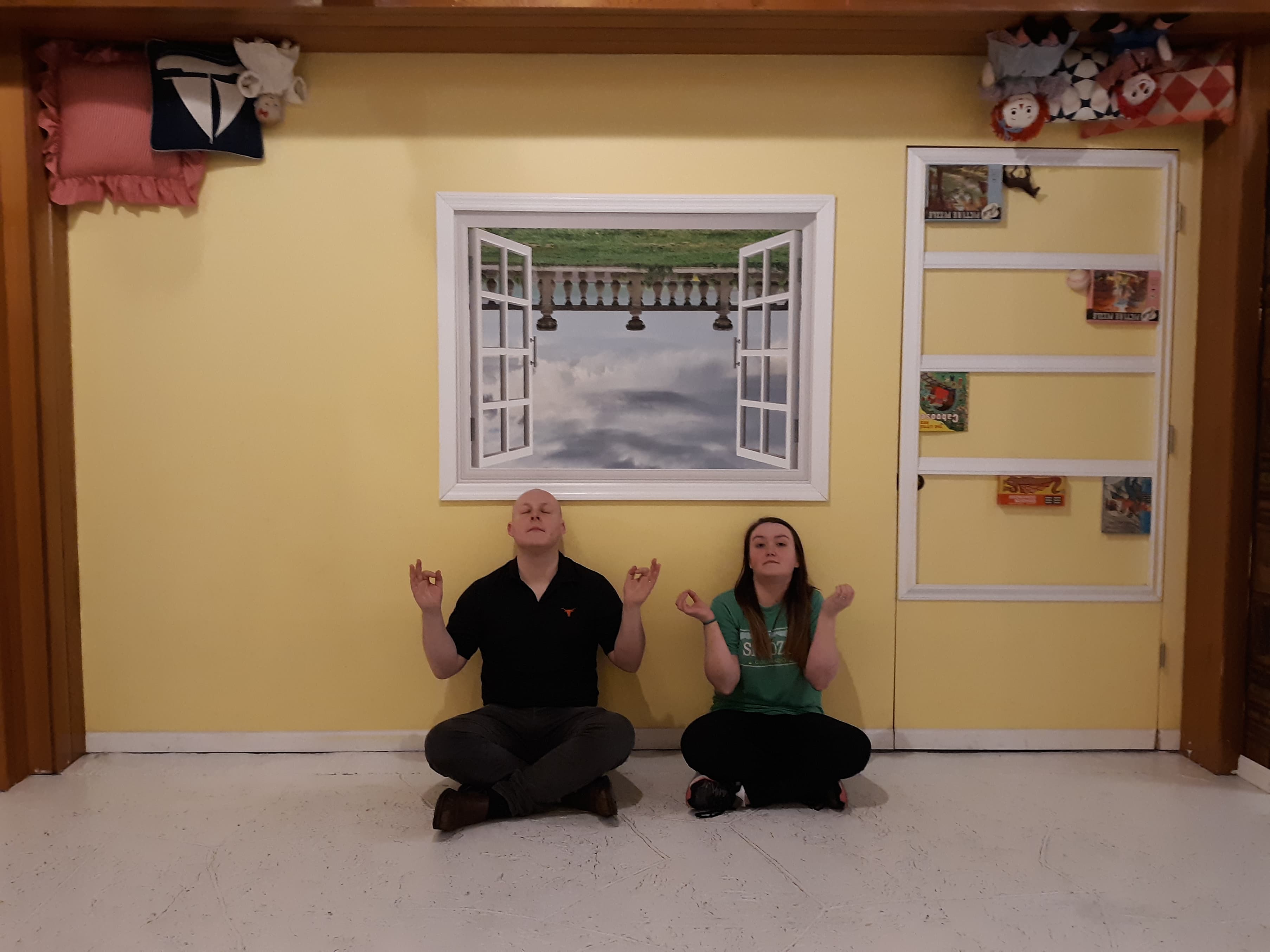 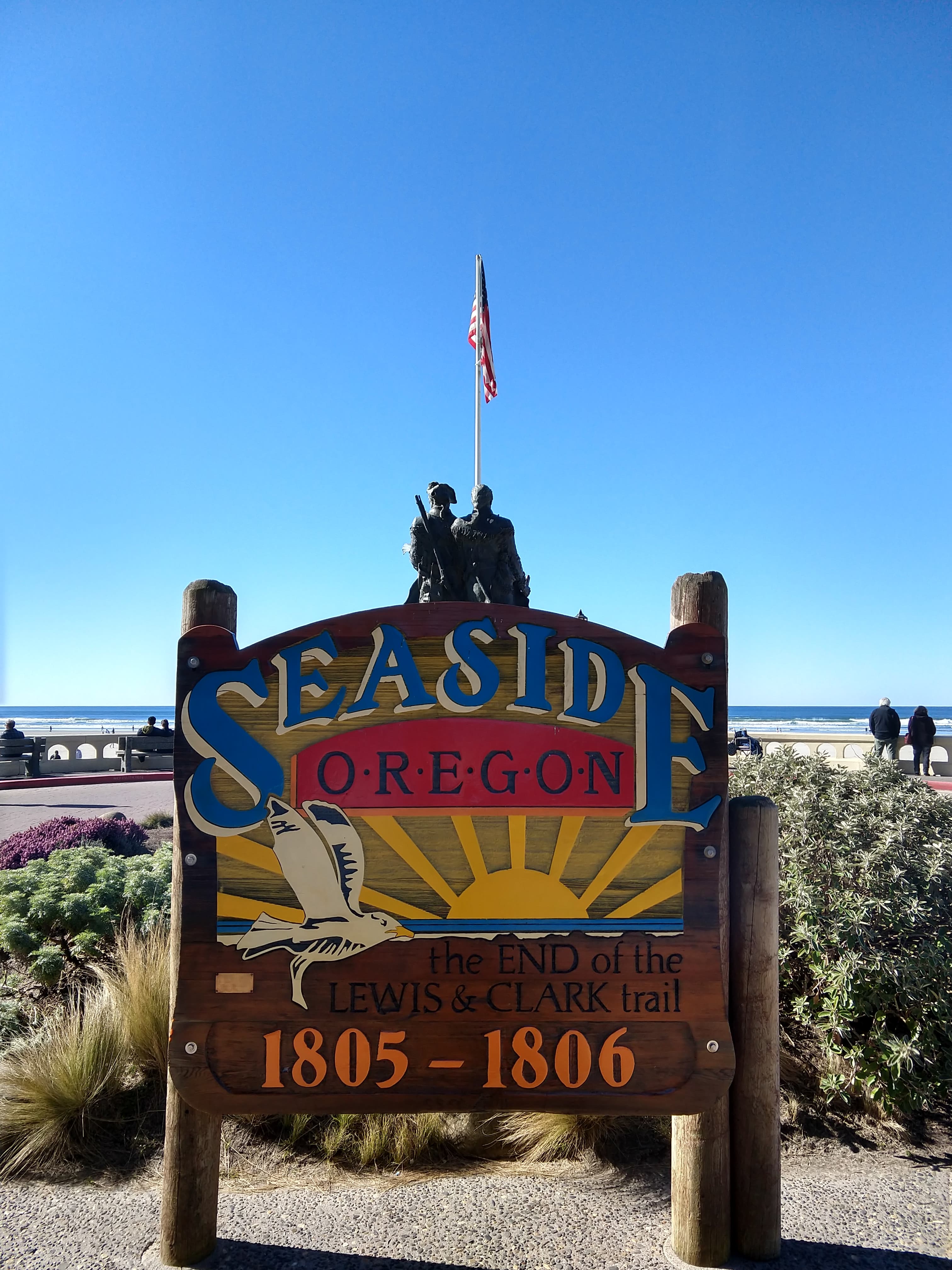 Next stop was the small town of Cannon Beach. Katie had been here as a kid, and had really wanted to stop there. In the ocean next to the town is a massive, 235-foot rock known as Haystack Rock. Unfortunately we couldn’t get terribly close to it, so we grabbed our penny and continued the journey.

Heading southward on the 101 we started to get into some of the areas with more spectacular views. 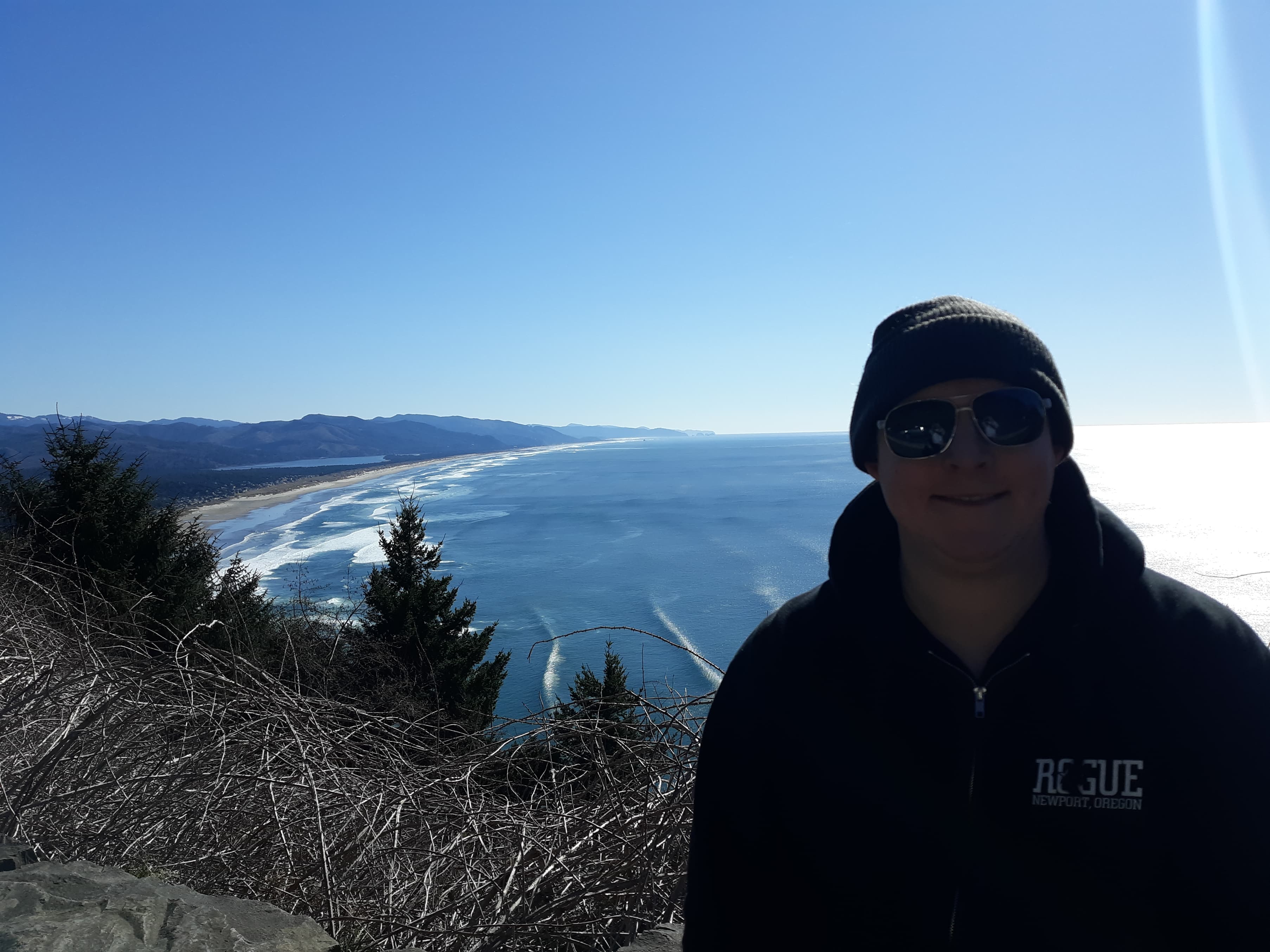 We even stopped at a crab shop, where you could fish for crab right off the edge of the dock! We came at the wrong tide, however, and were stuck with only taking pictures. It seems that this area is one of the highest producing areas of the country for Dungeness crab. 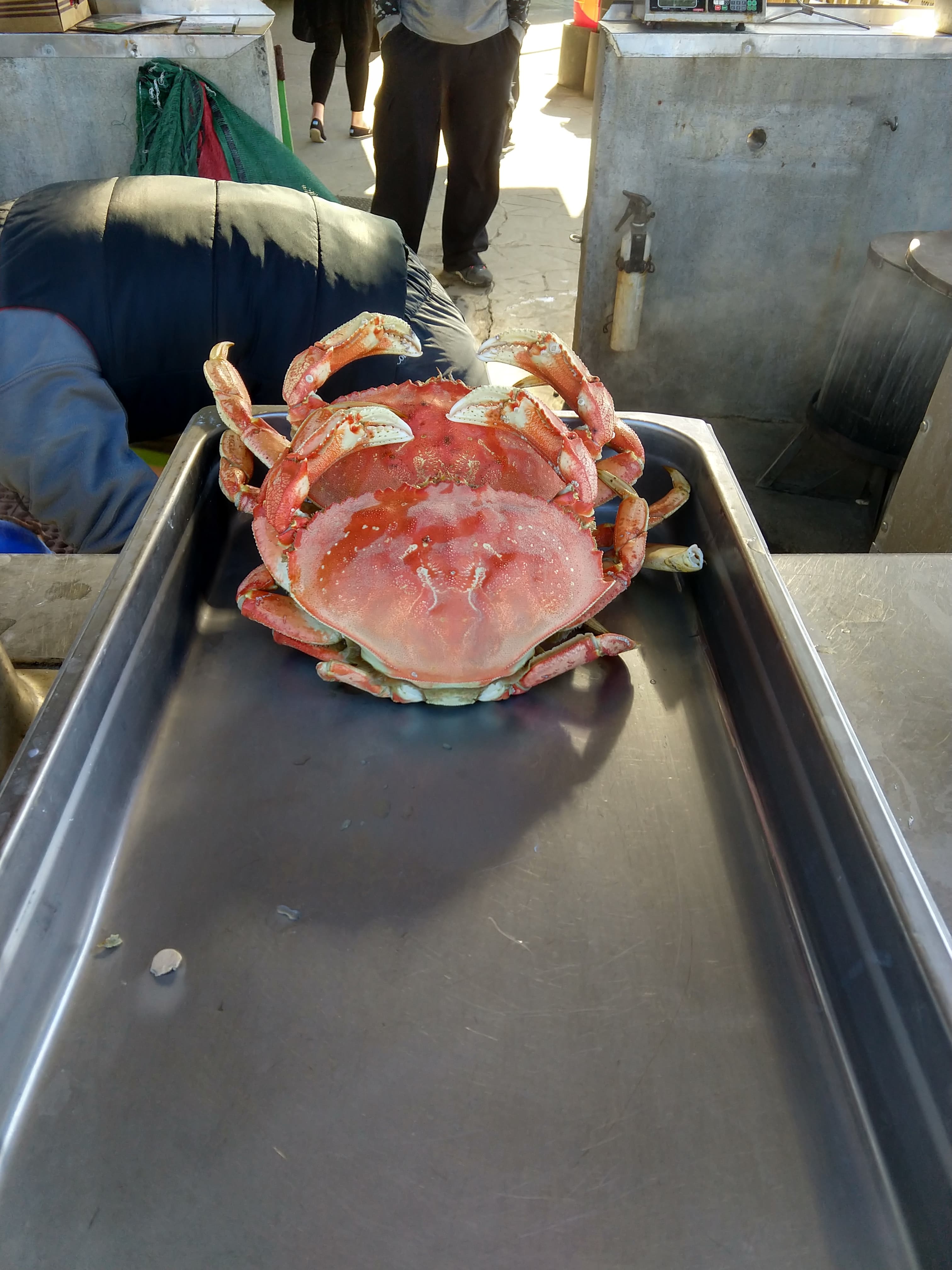 Next stop was what I like to call “the greatest place in the world” or simply “paradise” – Tillamook Creamery! Neither Katie nor I had ever seen cheese being produced, and I have to say it was absolutely fascinating! This creamery alone produces over 1 million pounds of cheese a week! We also learned how much salt goes into the cheese – which let me tell you is a lot more than you would expect. We sampled some of the local cheeses, headed to the gift shop, picked up some items (including some cheese that was only sold at that location) and continued on our way. 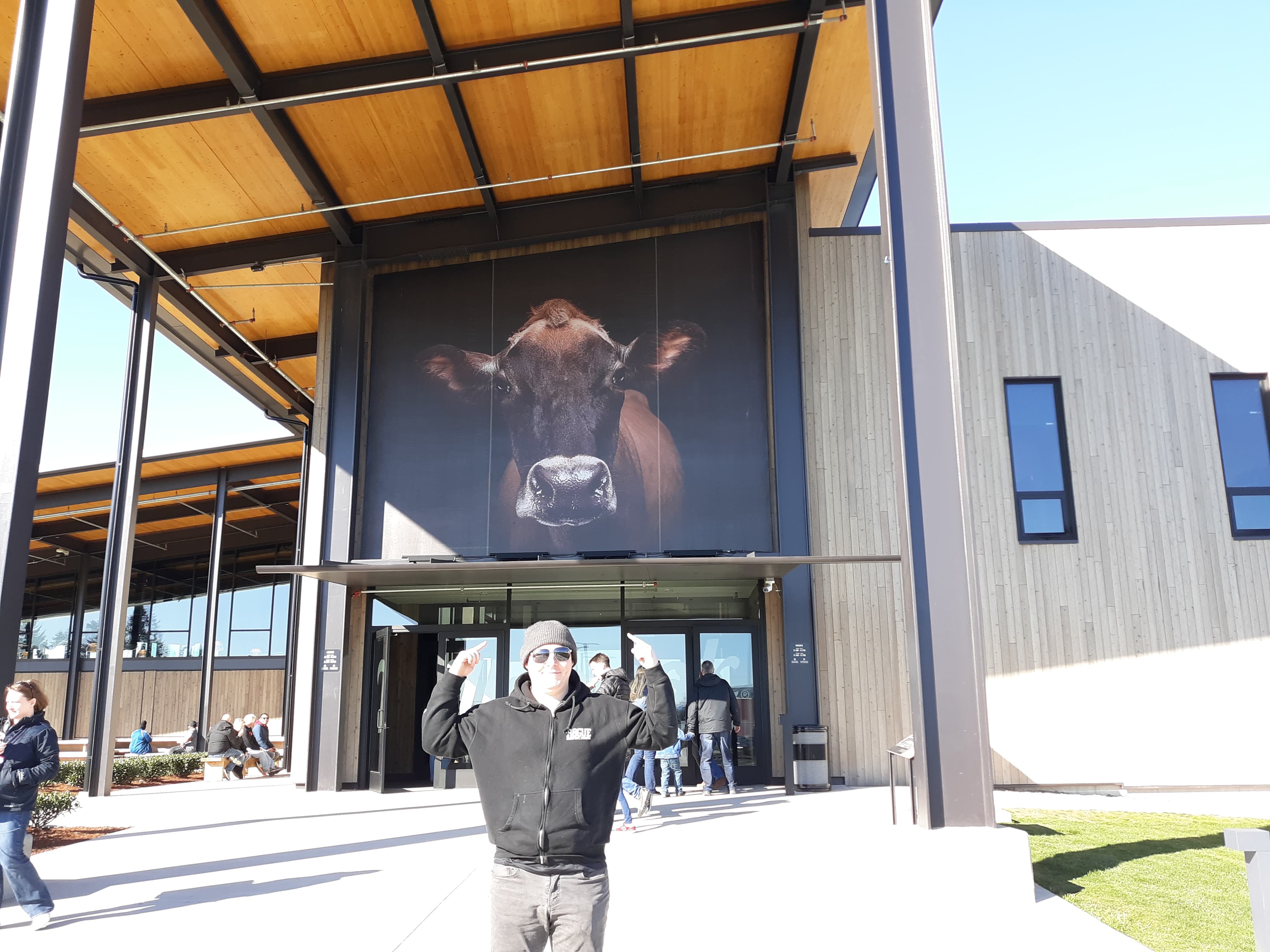 We hopped off of the 101 at this point so we could be closer to the ocean. I had tagged a couple of lookout points along the highway here, but we weren’t exactly expecting to see what we did next. As we were driving, we passed through the town of Sandlake, where there is a 5 sq. mi. area of wind dunes that have blown fairly far off the shore! It was a little surreal to drive through. 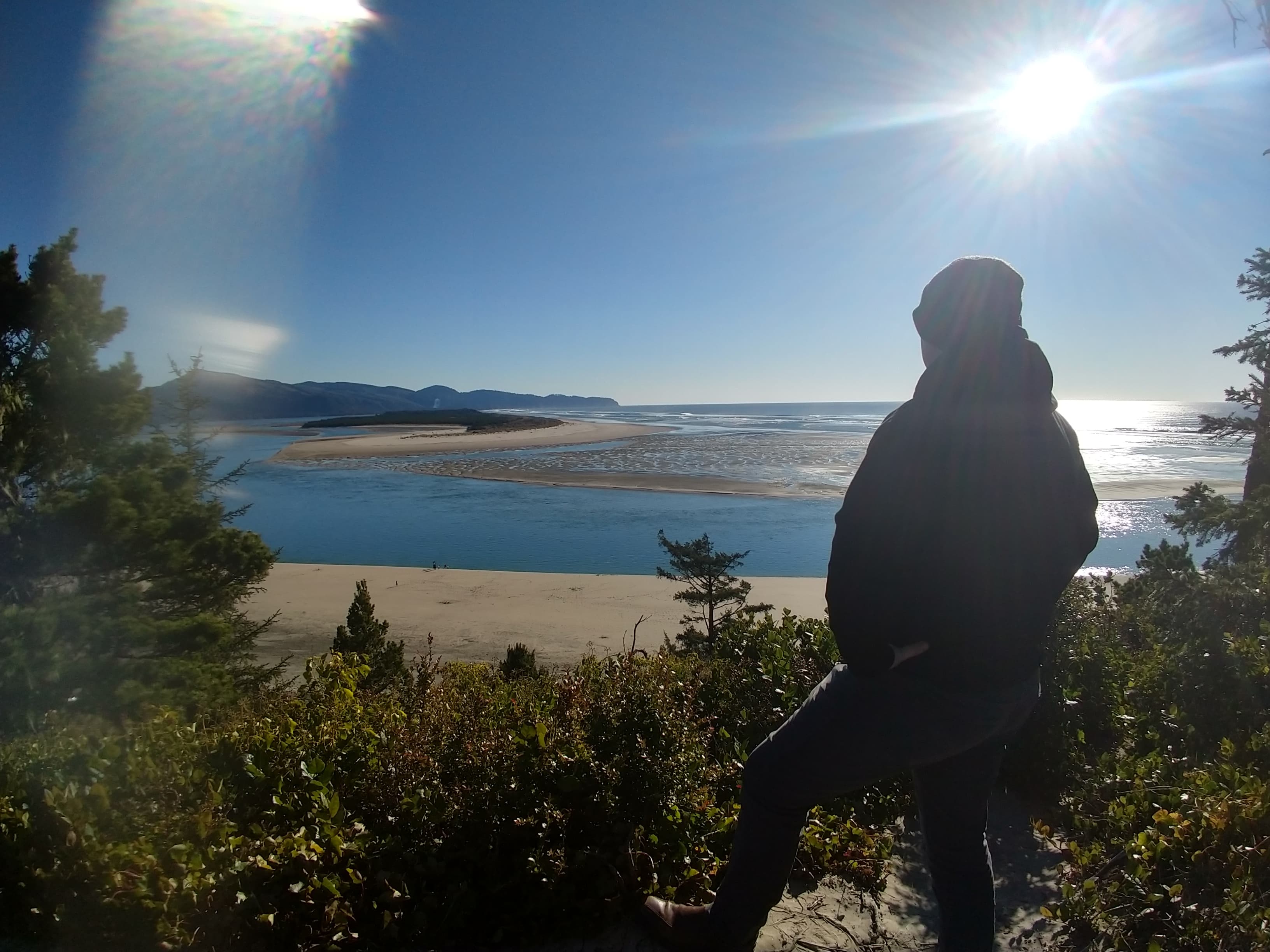 We kept going south to the small town of Neskowin, where “Proposal Rock” is located. Allegedly, it is named so as a local sea captain had taken his love there when he proposed. We walked out on the beach, mostly worried that one of the many dogs running around would end up soaking us in wet-dog-and-seawater. By this point we could tell the sun was setting, so we headed to our final attraction.

We watched the sunset at the Devil’s Punch Bowl. This geographic formation was very interesting. Basically, water pushes small organisms into an uplifted area, where birds sit waiting to devour their easy prey. It was a very neat sunset, and I was even able to get a neat timelapse of the sunset! 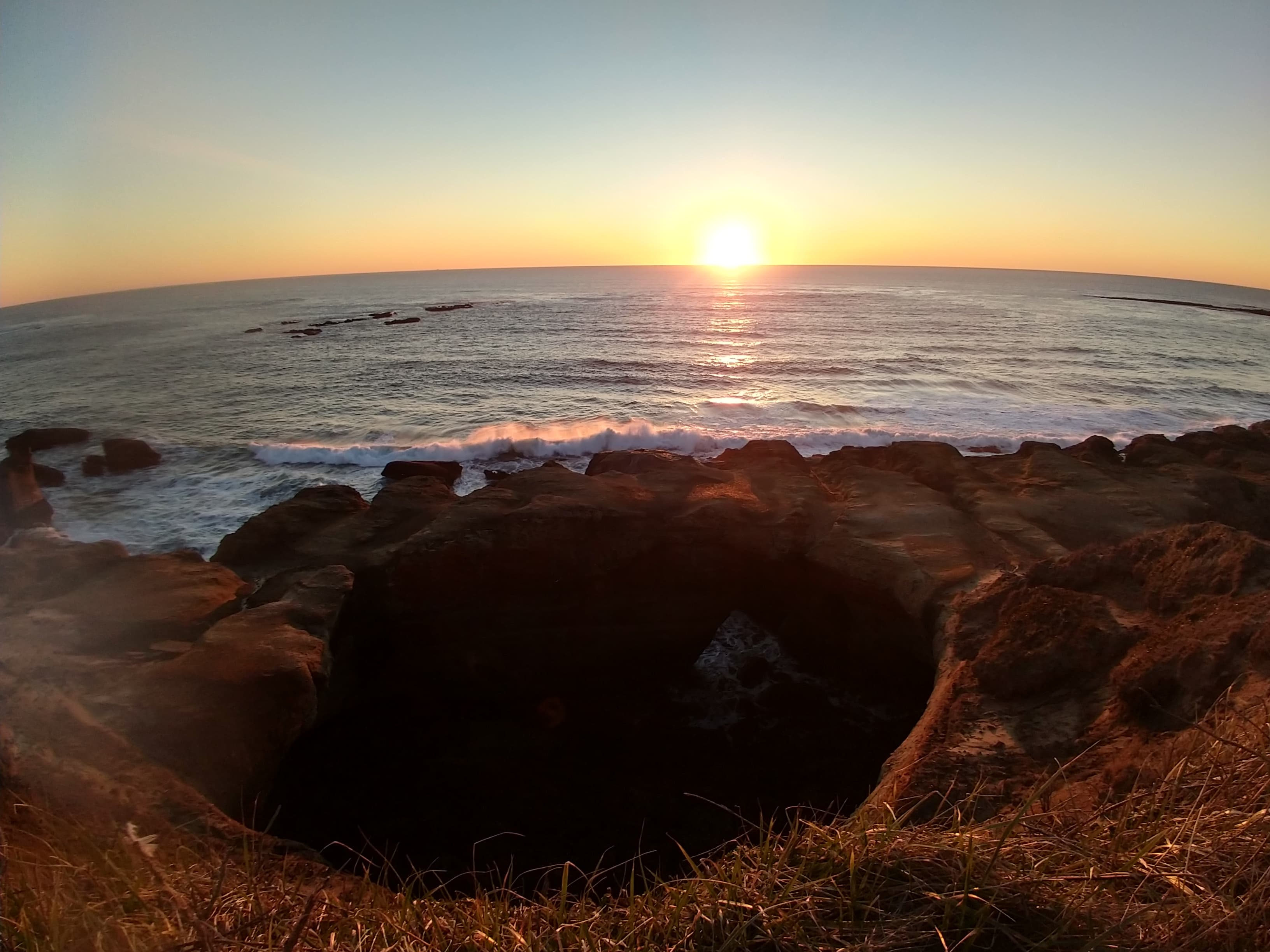 We then headed into the town of Newport, OR, known as the “Dungeness crab Capitol of the World”, and made our way to one of the highest rated local restaurants, the Clearwater. Having not eaten much seafood yet, we ordered a whole crab as well as Halibut fish and chips. Overall, quite exquisite. It even came with a delicious garlic butter dipping sauce.

Upon leaving the restaurant, we were alarmed by what sounded like a pack of wild dogs barking. We walked around the corner of the restaurant and saw nearly 30 sea lions sleeping on the dock. Every once in a while, one would try climbing up a little higher and the others would begin barking, yelling, and biting at him. It was a site to see. Katie even became a little nervous. Apparently these guys head south to Santa Barbara in July, so at least the locals get peace and quiet every once in a while! 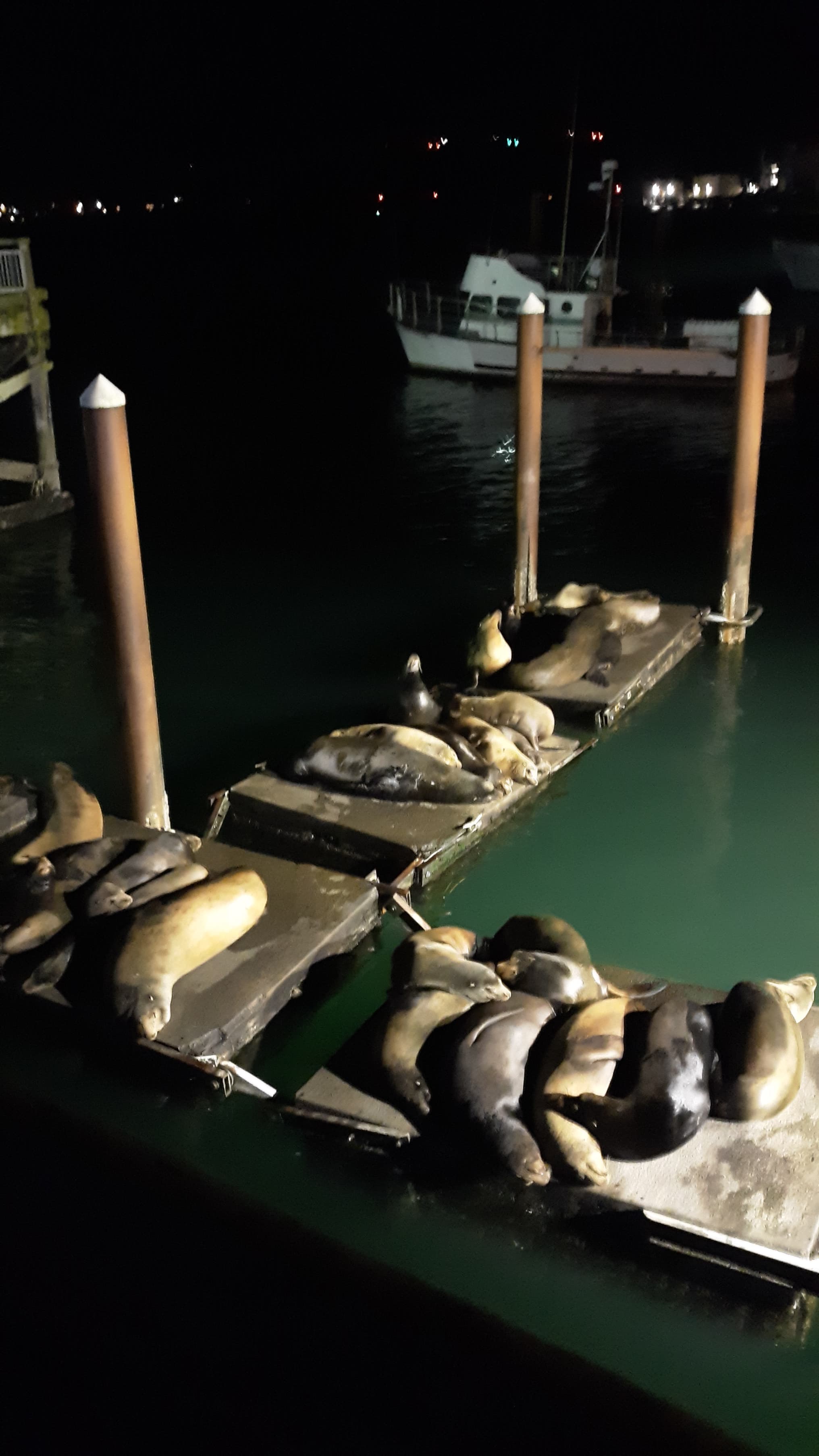 Overall a ton of fun! Tomorrow we are heading to the town of Reedsport, then driving along the 38 and 138 over to Crater Lake. Our goal is to make it to Grants Pass or Ashland to sleep! Then onwards to California!